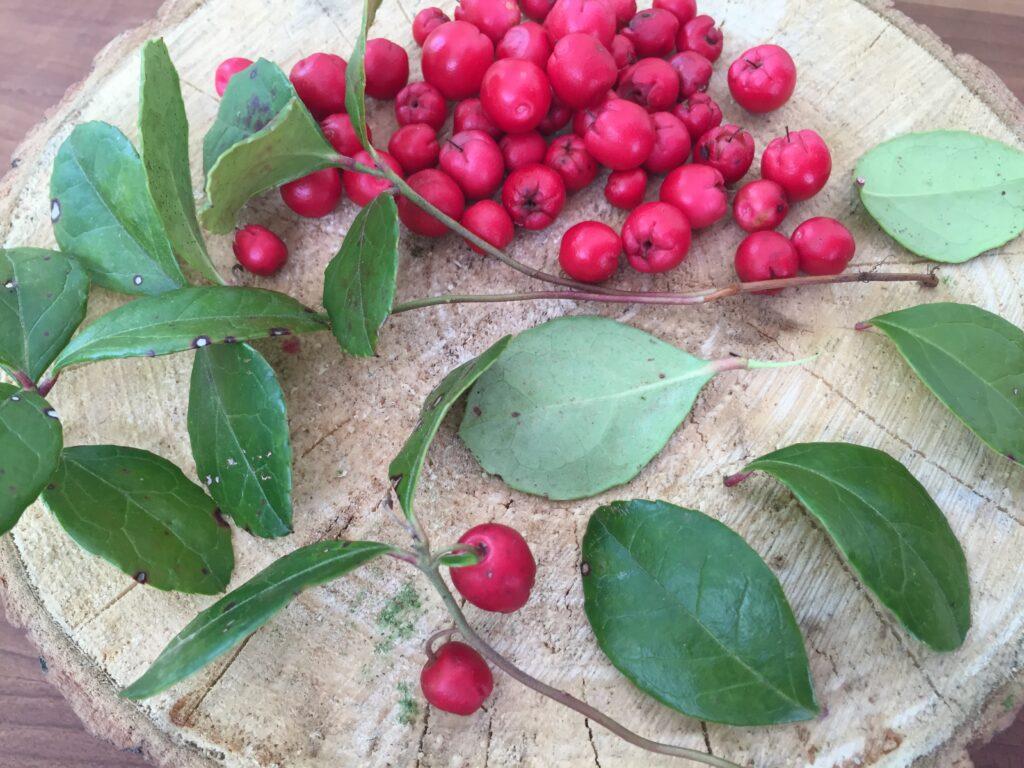 Ever since I was a young boy I’ve enjoyed picking wintergreen in the woods. The fresh minty smell of the leaves when you break them open, the refreshing flavor of the plump little berries.. plus they’re just cool looking little plants. With the bright red and green they always made me think that they looked like the perfect winter holiday decorations.

Growing up, like most kids, I spent a lot of time outside playing in the woods. Carving names on trees and chasing frogs, there was always fun to be found in the forest. When I got a bit older, between the ages of twelve and fifteen, I spent a good amount of time finding peace and silence in the woods. I was really into Tai Chi and meditation at the time (kinda weird for a 14 year old boy maybe) and the woods back behind my grandma’s apartment was home to my practice. It was peaceful and I was the only one out there.. aside from the squirrels, birds, trees and berries. During the summer I would pick blueberries and raspberries when I found them, but I was always drawn to the wintergreen. Even when there were no berries to be had I would still enjoy chewing on the tasty leaves.

Now fast forward a decade or so.. I’m a 25 year old man living in a apartment not too far from where I grew up. In fact, it borders the same woods I used to play in as a child. Just as I had changed dramatically in the last ten years, so had the beloved forest of my youth. It was no longer a sprawling forest that one could walk through for hours.. most of it was now roads and houses, small neighborhoods had sprung up in all of the old play places.. A small section of the woods had been reserved though, and turned into a nature area by the city. Luckily this was next to where I lived! It even included my old meditation space. The city had now named this area Huron Park. I’m not sure why they had chosen this name, but remember Huron Park.. it comes up again later in the story.

It was when I lived at this apartment that I met the young lady that would later become Mrs. Cohen. I had moved into this small apartment with two roommates and oddly enough, one of the roommates was friends with the couple that lived in the apartment next door. Small town stuff. The neighbors used to come over and visit on occasion and one time they brought their friend Heather along for an afternoon of playing Mario Cart. And yup, you guessed it, that’s the very same Heather that I share my Small House with today! Crazy huh?

Heather and I spent a lot of time walking through Huron Park together. That’s where we had some of our first conversations, and our first picnics too! I even tried to impress her by showing off how much I knew about the plants growing there in the woods by introducing her to my friend wintergreen. We certainly spent some time gathering berries together in those woods and those were some very special times that created some memories that will be with me for a lifetime.

Let’s fast forward again. This time right up into the present. Heather and I are happily married with two awesome young boys. We’ve been blessed with the opportunity to share our Small House life with all of you in so many different ways. And our old friend wintergreen is right here with us. In fact, it grows quite prolifically in our woods. And in the 1100 acre forest across the road from us. An 1100 acre patch of wonderful nature that just happens to be called Huron Forest. I couldn’t have planned it better if I I had tried.